Say Yes to the Test 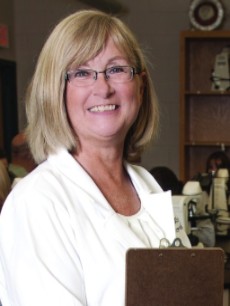 Developing an accurate diagnostic test for Lyme disease remains a scientific challenge. Current serological tests show limited clinical accuracy, and the development of new diagnostics has been hindered by reasons that include the remarkable and poorly understood biology of Borrelia, and a limited availability of suitable technologies. A major hurdle to progress has been the lack of readily accessible, well characterized blood samples from a broad spectrum of Lyme disease patients.

Currently, the human blood samples being used to “train” various emerging technologies to recognize Borrelia burgdorferi (Bb) infection/Lyme disease, are obtained mostly from people who were diagnosed with Lyme disease because they developed a specific type of skin rash called an erythema migrans (EM). The EM rash, which looks similar to a “bulls-eye,” is presumed to occur in the majority of Lyme disease patients.

EM rashes have been equated with Lyme disease since the 1980s. This is thanks to scientific bias imposed by the “discoverers” of Lyme disease, who noted the unusual rash as a distinct feature of a new disease. Since that time, the majority of research studies designed to investigate the clinical spectrum of the disease, investigate treatments, look for diagnostics, etc., have been overly focused on the patient population who showed the rash.

It’s true that a person who develops a classic, bulls-eye rash is probably infected with Bb, and probably has Lyme disease. But the real question is – or should be – do Bb infected people always or nearly always develop an EM rash?

The answer is no. The oft-repeated assertion that the EM occurs in 70 – 90% of Lyme disease cases is not substantiated by science.

From human and non-human primate (NHP) research it is known that only about 10% of Bb-infected Lyme cases present with a “classic” bulls-eye like rash. About 50% show other (atypical) types of rashes, with about 40% of cases presenting with no rash at all. These stats are confirmed with data from Lyme disease patient registries – data which has, however, been largely ignored because it comes from the Lyme disease patients themselves.

Never mind that data derived from patient registries is considered critical for research on other diseases, such as cancer, Alzheimer’s disease, cerebral palsy and pediatric asthma, to name only a few. So what makes Lyme disease patient data any different from the data from patients with any other disease?

Besides the fact that Lyme disease patients continue to experience a degree of doubt and discrimination not seen since the early days of the AIDS epidemic, the difference is – there is no accurate way to determine who truly does and who does not have “Lyme disease.” And that traces directly to the lack of an accurate diagnostic test for Bb infection.

The medical opinion that Lyme disease “starts” with an EM the majority of the time and that the EM represents “early” infection is true for about half of all Lyme disease patients. The skin rash is due to localization of skin-tropic genotypes of Bb in the skin, while other genotypes rapidly move on through the blood to other tissues, like joints, heart, and nerves. So EM may not be seen at all in “early” infection, and likewise EMs can be observed months to years after the initial infection as a result of recurring inflammation induced by a persisting Bb infection.

In addition, as one study has shown, rashes (as an indicator of “early” Bb infection) are difficult to recognize as an erythema migrans by healthcare providers. The rash may be mistaken as a spider bite or insect bite and the diagnosis of Lyme disease will be missed. Likewise, bites from other arachnids/insects may be misdiagnosed as an EM. This is especially true when the offending arachnid/insect is not actually seen at the time the rash is observed.

A distinct, physician-identified EM rash equals Lyme disease. BUT, Lyme disease does not equal EM rash only. Overstating the occurrence rate of EM to try to bolster support for a technology under consideration as a potential commercial diagnostic test for Lyme disease is bad science. Bad science results in bad medicine. Both are bad for patients.

Any blood test technology that emerges from data derived from blood samples provided only by Lyme disease patients diagnosed by EM, will only be as accurate at identifying EM as a marker for Lyme disease. Which is not very accurate at all.

The human response to infection with Borrelia burgdorferi (Bb) is heterogeneous, according to numerous peer-reviewed studies. Not everyone bitten by a tick is infected with only Bb. Not everyone infected with Bb produces the same antibodies, the same proteins, or even the clinical disease presentation. The path forward to a diagnostic test must diverge from long-standing dogma that everyone bitten by a tick has the same infection and the same clinical disease.

The serologic tests currently available to support Lyme disease diagnosis cannot accurately identify people with new or long-standing Bb infection, discriminate a new infection from a past exposure or infection, will not recognize any potential tick-borne co-infections, and often can’t distinguish Lyme disease from other infectious or non-infectious diseases. What we don’t need is another test that is “as good as” what we already have.

We need to “Say Yes” to a test that can accurately distinguish between who is, and who is not, infected with Bb. Because only then can we design new research studies to investigate the true spectrum of the clinical disease that accompanies the infection, and search for effective treatments.

Which means we need to be ready to say NO to tests that are only “as good as” the EM rash and/or serology for diagnosing Lyme disease.